A TOAST TO TEN

To celebrate this tenth issue, MacGuffin invited ten creatives to come up with a label for a fictive bottle. Inspiration for the contents came from a host of sources, ranging from spicy Egyptian cuisine and Maori vowel sounds to big-billed pelicans and a Chilean novel. 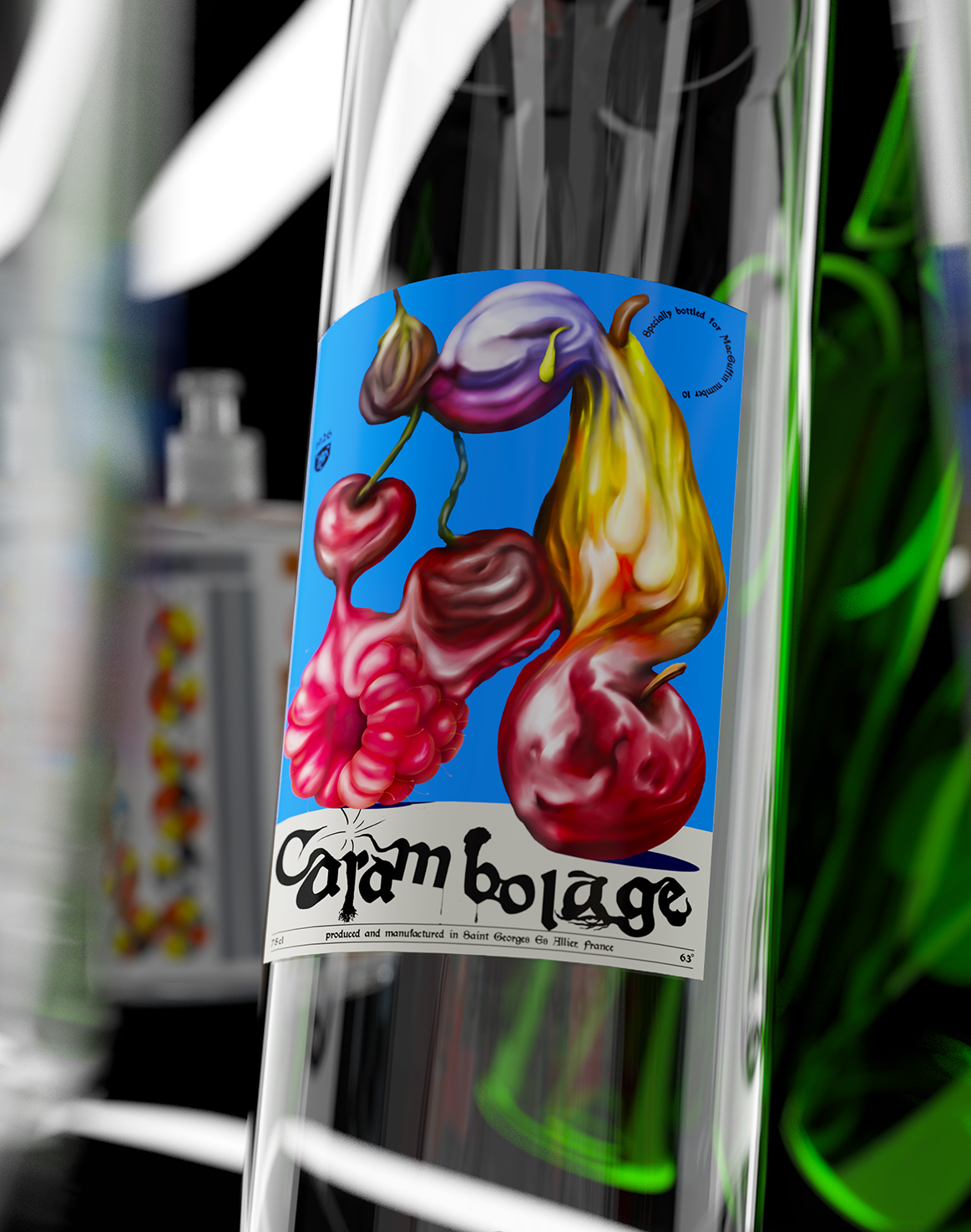 The Fridges of
the Famous

An exclusive asset once kept from the public eye, the celebrity self now invites us to marvel at their homes, and the curated contents of their fridges. 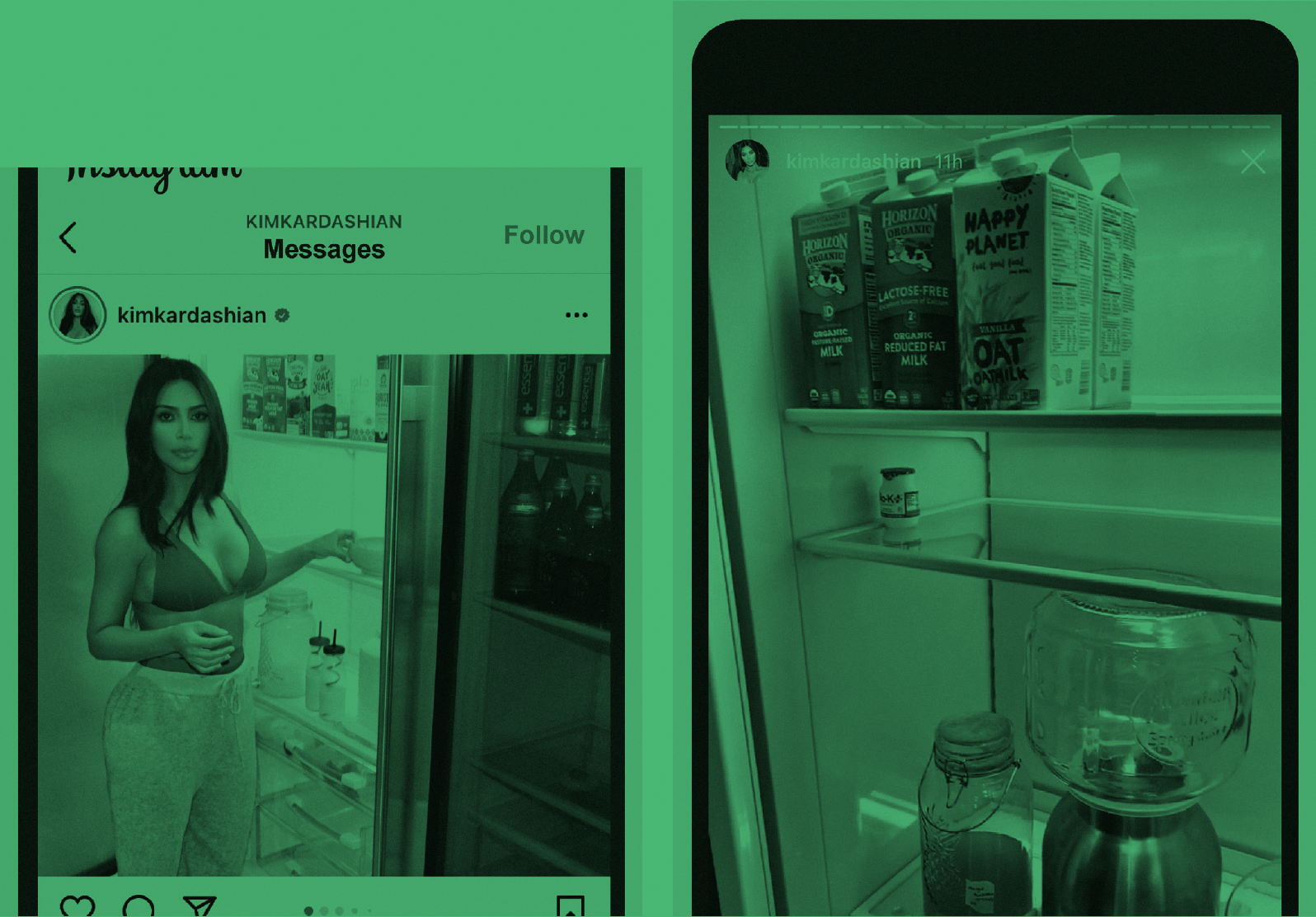 Text by Johannes Reponen
On Thursday 9 January 2020, the Independent newspaper published an article with a headline that read: ‘Kim Kardashian Addresses Rumours about Empty Fridge with Tour of Kitchen’. This video tour was posted by the American media personality, socialite, model, businesswoman, producer and actress on her Instagram account, followed by 227 million people. It was created in response to a rumour mill sparked by a picture she posted a few days before on Twitter to promote her SKIMS Cotton Collection, which saw her posing in front of two refrigerators that had nothing in them but water and milk. The water, in glass bottles because she avoids plastic, was arranged in the way you might find them in a supermarket — different brands in neat rows. And it wasn’t just a carton of milk but varieties of it. Apparently, the lack of food is what got her fans worried, not the amount or the variety of milk she had in there. “Okay, so since the inside of my fridge is so baffling and I saw all these news reports, I’m going to give you guys a tour of my fridge,” is how Kardashian, ‘wearing’ a cherry Instagram filter, introduces her mini-docu before proceeding to guide viewers on a sightseeing tour of not just one fridge, but various fridges positioned in different parts of her home, each of them dedicated to one category of food or drink. What appears to be the dairy fridge, for instance, off ers the following options: Califa Farms unsweetened vanilla almond milk, Califa Farms almond milk creamer, Happy Planet oat milk, Planet Oak vanilla oat milk, Horizon Farms reduced fat milk, Horizon Farms heavy cream, Coffee-Mate French vanilla creamer, Milkadamia macadamia nut milk and Malk unsweetened vanilla almond milk. The Independent wasn’t the only paper covering the tour. Countless articles and TV segments dedicated to the news story circulated online.
This interest in a celebrity fridge tour might sound a little ridiculous at first. Yet it’s also unsurprising. It’s just one step further than celebrities inviting the likes of Architectural Digest, and therefore in theory all of us, into their homes by also opening the doors of their fridges for the superfans, Instagram followers and those simply curious to ogle. While there are magazines dedicated to the interiors of celebrity houses, this fridge showcase content might sound like a niche topic by comparison, but there’s plenty of it in publications that capitalize on the lives of others, among them People, Page Six and The Sun. Whenever someone even vaguely famous opens a fridge, it can be turned into a story, a slideshow, a quiz — Can you guess which famous faces own these refrigerators? — or perhaps a long-form analysis embellished with some academic theory. Our collective fascination with celebrities and their homes, and their fridges, is nothing new but over time the media has made the gap between ‘us’ and ‘them’ that little bit shorter.
When Edward R. Murrow interviewed Marilyn Monroe together with photographer Milton Greene and his wife Amy Greene at their home, the distance between them was in stark contrast to the closeness we might experience today. In the episode that aired on 8 April 1955 for Person to Person, a mixture of celebrity interviews and celebrity house tours, the interviewer sits in a comfortable chair in his New York studio smoking a cigarette, while Monroe and the Greenes appear in a carefully staged choreography at the house in Western Connecticut. Technology facilitated the dialogue between the two parties, but the boundaries between them were controlled, and no fridge doors were opened. That certainly wasn’t the case half a century later when MTV Cribs, a documentary programme in the same genre as Person to Person, included a compulsory inside-the-fridge-segment. In the episode where rapper 50 Cent leads a tour around his 19-bedroom and 35-bathroom house, addressing viewers directly as if he knows us and we know him, he doesn’t forget to reveal the contents of his fridge, orderly filled with bottles of Vitamin Water. Nothing but Vitamin Water. What he didn’t mention was that he happened to have a minority stake in the brand at the time, and when the Coca-Cola Company in 2007 acquired Vitamin Water from Glac.au for 4.1 billion dollars, 50 Cent is thought to have walked away with a figure somewhere between 60 and 100 million dollars. The private self was once a rare and exclusive asset kept as far as possible from the public eye and paparazzi. Now it’s the opposite. Or is it?
1. Lorenzo Lotto, Family Portrait, 1524. Courtesy Hermitage Museum, St Petersburg 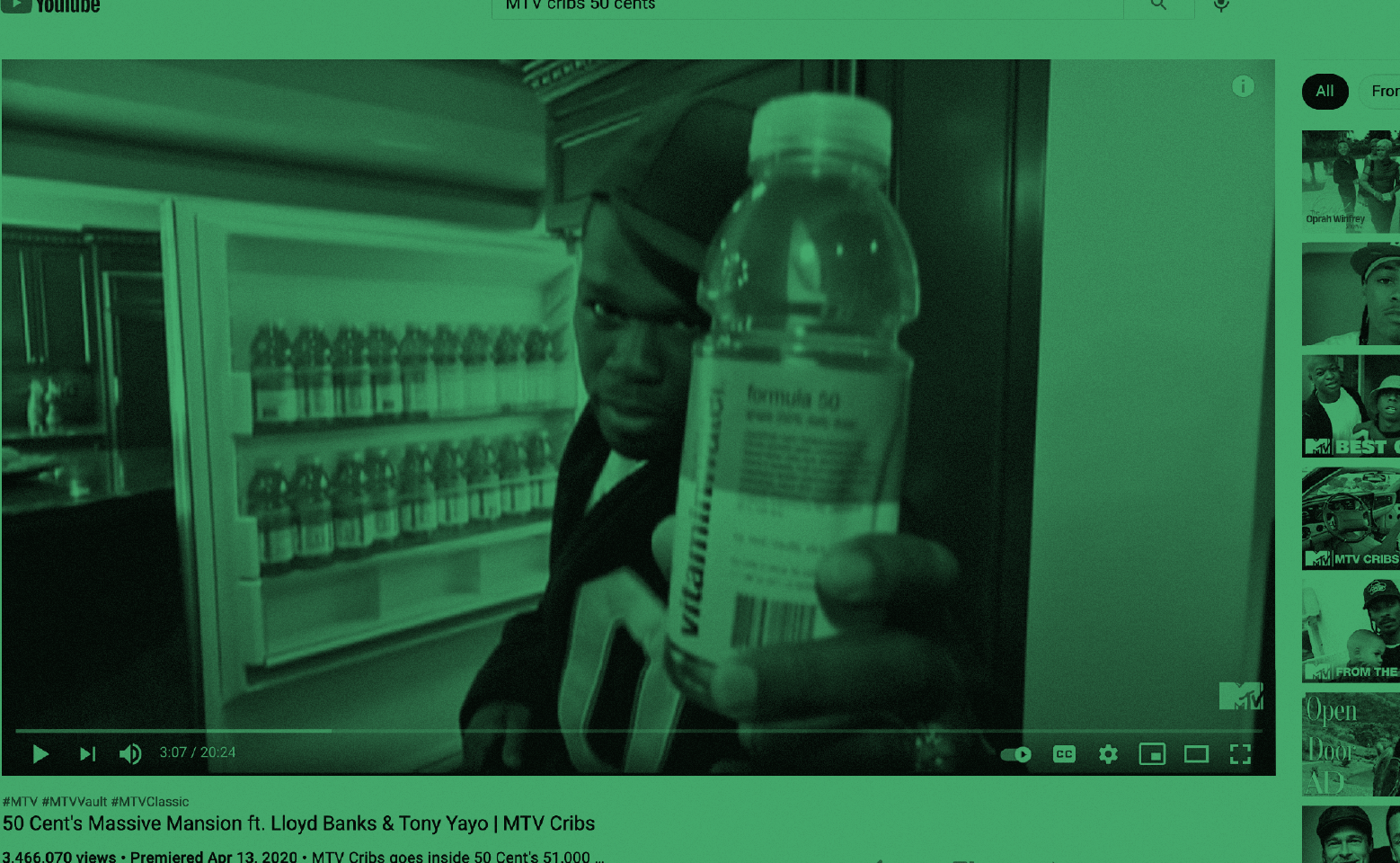 Researchers Alison Marwick and Danah Boyd argue that the notion of celebrity should be understood as a practice rather than a state of ‘being’.* For them, it is “an organic and ever-changing performative practice rather than a set of intrinsic personal characteristics or external labels”. This practice involves the ongoing maintenance of a fan base, performed intimacy, authenticity and access as well as construction of a consumable persona. Given our collective interest in fame and everything around it, it is no coincidence that celebrity homes and celebrity fridges have become part of the construction of this consumable persona. They even resemble spaces that we normally associate with consumption. In houses that look like upscale furniture showrooms with little or no signs of life, complete with walk-in wardrobes that mimic high-end luxury fashion stores, it is no surprise to see fridges that are like those in supermarkets. Brands and products that are curated in rows in an orderly manner and fridges dedicated to just one type of product — milk cartons or bottles of water, say — and the multiple variations of it. You just have to have the options. And the glass doors on the Kardashian fridges are only possible because there is now a multimillion-dollar industry for people to either organize cupboards or give advice as to how to organize cupboards, from Mari Kondo to HomeEdit. Colour-coordinated, size-matched, labelled and laid out in a style that is aesthetically pleasing, definitely Instagrammable and inviting for a never-ending journey of consumption. And all of this is mixed with the perceived intimacy of being in someone’s home. It’s the reverse of shops trying to emulate the appearance of high-end homes with sofas, paintings on the wall, perhaps a scattering of decorative cushions and throws, even fireplaces — all there to let you linger and feel at home while blurring the lines between public and private.
1. Lorenzo Lotto, Family Portrait, 1524. Courtesy Hermitage Museum, St Petersburg 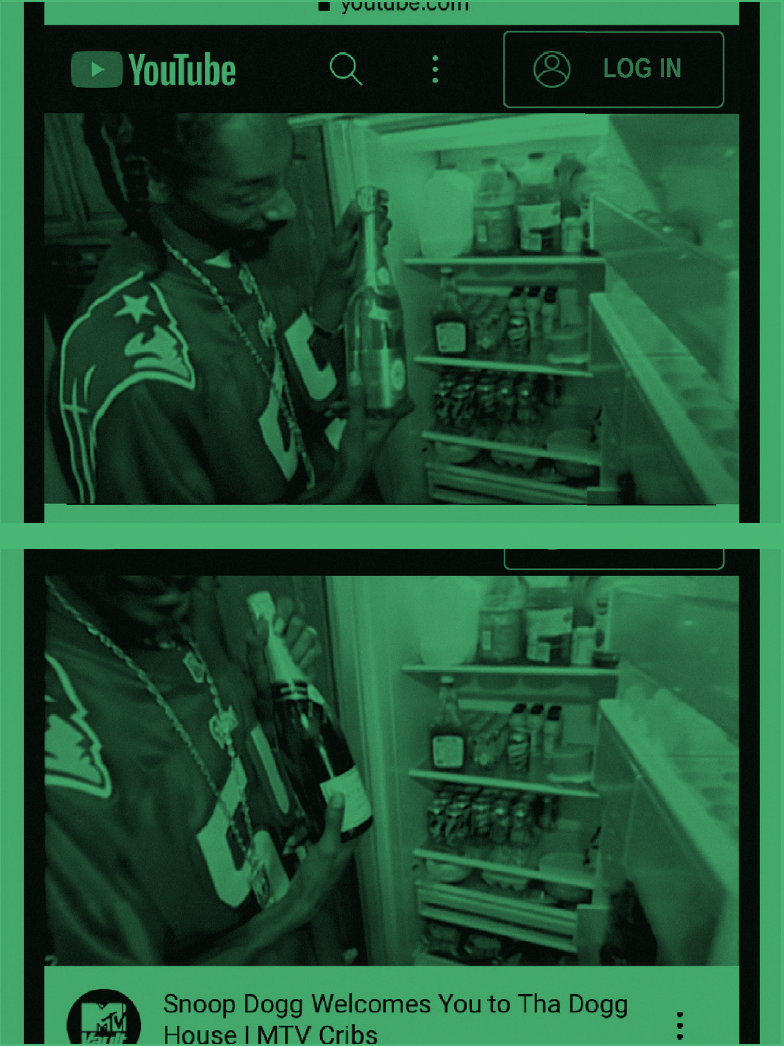 Celebrities reveal what appears to be personal information to create a sense of intimacy between ‘them’ and ‘us’. They publicly acknowledge fans, and use language as well as cultural references to create affiliations with followers. The bottles in Kim Kardashian’s fridge are there for her and her family, but for us too. Although product placement comes naturally to this businesswoman, unlike 50 Cent she is not trying to sell us bottles of water or cartons of milk. These liquid items are an extension of her brand attributes and part of her sellable celebrity self — she is wholesome and healthy but, like the rest of us, she is not perfect. After all, she also has an industrial frozen yogurt machine in her second pantry as a symbol that she is only human. “We are building on the property all organic trees to grow our own vegetables and do all of our own stuff,” she proudly declares during the fridge tour while standing in a walk-in refrigerator that has wire racks bursting with produce — sort of a twenty-first-century version of a Dutch still life. This is in stark contrast to just 10 years earlier when MTV Cribs aired. The notion of celebrity was different then, as were the values that underpinned it and the associations that governed the lifestyle in constructing a celebrity self. During his MTV Cribs house tour, American rapper Calvin Cordozar Broadus Jr., who also goes by the name Snoop Dogg (previously Snoop Doggy Dogg and briefly Snoop Lion), declares: “My favourite, Crystal — what would life be without it? Or some Moet? Why not?” And American singer, songwriter, actor, businessman and dancer Usher Raymond IV confesses: “Nothing in my refrigerator but water, water and wine.”
3. Bhojraj, Portrait of Prince Muhammad Buland Akhtar at Prayer, c. 1700 –1750. Courtesy The Metropolitan Museum of Art, New York
We’ve come a long way from the celebrity fridges seen on MTV Cribs to those Kardashian showcased on her Instagram Live. Her fridges say so much about the way the boundaries between public and private are as blurry and see-through and distorted as the glass bottles of water that fill them. Culturally, we have reached a point where very little seems to be left in private while everything is shared. And since everything is shared, nothing is left uncurated and anything from a product to your celebrity self can be monetized. Whether it’s the fridges seen in MTV Cribs or those in the House of Kardashian, there has always been a lack of food in the celebrity fridge. No wonder so many celebrities have stakes in companies that put liquid — alcoholic or not — in bottles. Even though Kardashian does not have stakes in a drinks brand, her sister Kendall does own a tequila label called 818. When Kim shows us her fridge filled with rows and rows of glass water bottles in a performance of her private life on social media, it is the equivalent of Jay-Z rapping about “gold bottles on to that Spade shit”, referring to Armand de Brignac for which he was paid millions of dollars along with equity to promote a champagne brand. Underpinned by a transaction or not, the job of a humble bottle standing in the crowded fridge of a celebrity has very little to do with quenching a thirst. Instead, it’s yet another accessory to widen the gap between ‘us’ and ‘them’ with the help of technology that paradoxically promises to do the opposite.
* Marwick, A & Boyd, D (2011) ‘To See and Be Seen: Celebrity Practice on Twitter’ in: Convergence: The International Journal of Research into New Media Technologies 17(2) 139–158
7. Philip Henry Delamotte, Alhambra and Court of Lions, Crystal Palace, Sydenham, c. 1859. Courtesy The Metropolitan Museum of Art, New York
10. Niche ‘Bellini’ Carpet, Anatolia, late 16th century, 177 × 134 cm. Zaleski Collection. Courtesy of Moshe Tabibnia Gallery, Milan
19. Taj Mahal Mosque Interior, Uttar Pradesh, India. Photo Alamy
SHARE THIS ARTICLE

THE CARPET AND THE TERRITORY

Both sacred ground and profane platform, the prayer rug suspends reality, transports worshippers symbolically elsewhere, and orders the confusion of life into a temporary perfection. 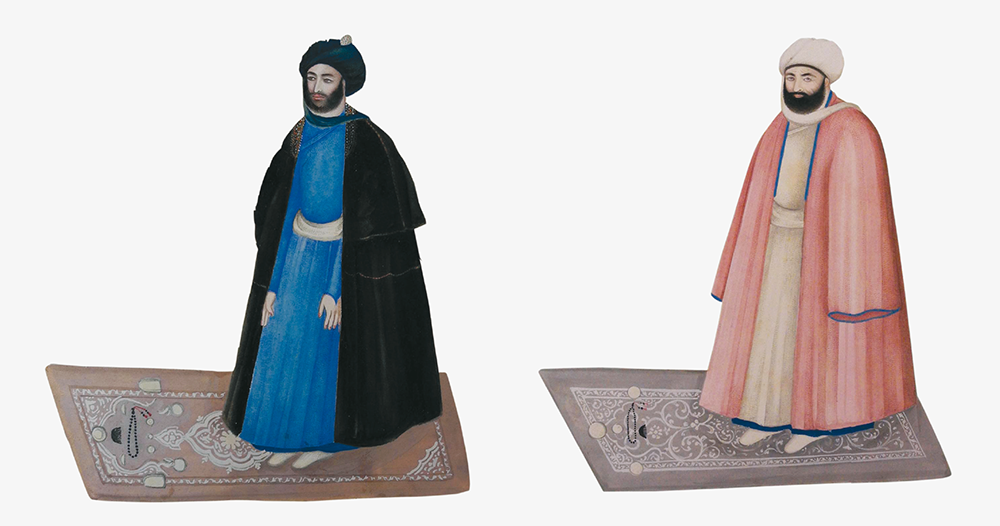